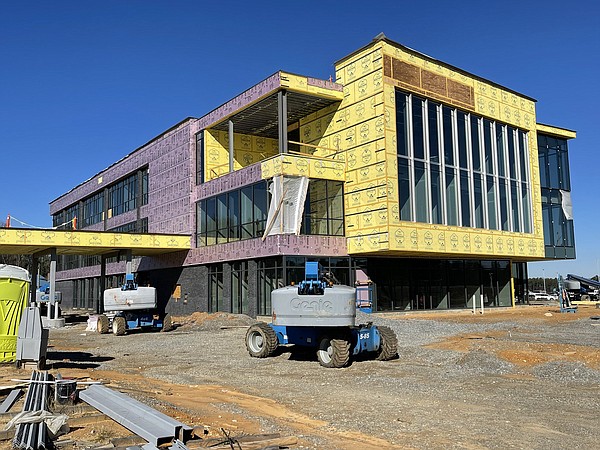 Almost a year ago, Relyance Bank opened its new $15 million headquarters in White Hall, and since then it has been helping reshape the cityscape west of Interstate 530.

The partially completed, three-story, 40,000-square-foot bank sits on seven acres on the south side of Sheridan Road, across from Smart Auto Group and Colton’s Steak House & Grill.

Behind Colton’s restaurant, a new $10 million TownePlace Suites by Marriott is under construction and is expected to be completed this summer.

According to 2020 figures from the Arkansas Department of Transportation, the number of vehicles at this intersection is approximately 26,000 per day, and it is one of the largest vehicle count intersections in Jefferson County.

The landscape in this area has changed dramatically from vacant fields to a growing commercial center, said White Hall Mayor Noel Foster.

“Yeah, everything is still on track, we haven’t had any major delays,” Jenkins said recently.

“The exterior of the building and facade is likely 75% complete with the remainder of the exterior glass, door and ACM finishing work [aluminum composite material],” he said.

They will begin furniture installation in June with an expected move-in date of early July, said Chuck Morgan, chairman and chief executive of Relyance Bank.

INSIDE THE NEW BANK

The first floor will have a universal pod-like design for the banking world, as well as ITMs (interactive banking machines), similar to familiar ATMs.

It will also house loan and credit offices and a call center.

The second floor will provide ample space for their trust and wealth management offices and human resources, while a meeting room and executive offices will be at the top.

There will be approximately 160 parking spaces for customers, guests and employees.

Morgan said earlier the new headquarters would house around 100 employees to start, taking up around 70% of the building. This leaves room for future growth.

Morgan said Jenkins, along with company president Scott Pittillo, “did an outstanding job in managing this construction project. They paid attention to every detail throughout the process. Our partners in this project ( Clark Contractors, Polk Stanley Wilcox, Colliers International and McClelland Consulting Engineers) are doing amazing work.

“Our July move is already planned and coordinated by Jenkins,” Morgan said.

A drone shot shows the rear of Relyance’s new head office being built on Sheridan Road in White Hall opposite Smart Auto Group and Colton’s Steak House & Grill. Behind Colton’s restaurant, the new approximately $10 million TownePlace Suites is going up. (Special for Commercial)